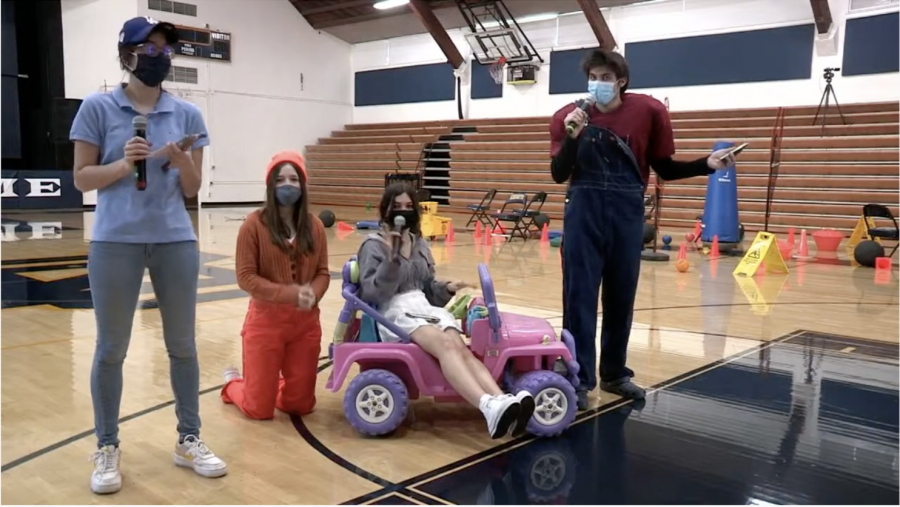 It’s refreshing to be able to end a long school week with something fun and exciting, and, on February 26th, Senior ASB hosted an online rally. This was Wreck-It-Ralph themed, based on the 2012 Disney movie.

Senior ASB members played the Wreck It Ralph characters, with Ben Aguilera as Ralph, Maddy Hicks as Q*bert, Isabella Ferucci as Fix it Felix, and Madi Stein as Vanelope.

DJ Poyer ‘21 said, “I had the best time planning the rally! I think we were able to come up with games that included everyone at home in a dynamic way, which has definitely been a challenge this year. We purposely created a rally that was a hybrid of prerecorded and live footage in the hopes that it felt unique to our viewers, which I can only hope worked out. And, I must say, it was an honor to be one of the few Notre Dame Students bestowed with the privilege of driving one of the golf carts. That alone made it one to remember for me!”

It was interactive, with students being able to participate from home for the scavenger hunt, where they had to find fruits from around their house to submit it and win for their grade level.

There was also a Minecraft Building Contest, where students were able to submit original, creative Minecraft creations to a Google Form to be voted on by the whole school. It was so amazing to see the talent and imagination of the students in these pictures, and a fun way to be artistic while being at home and playing video games.

There was also an obstacle course, in which Senior ASB represented the different grade levels and made their way through difficult mazes in the gym. This is a classic rally game from previous years, so this activity really made it feel like we were back at school.

The rally ended with a fruit roll up eating contest. One person from each grade level was given a fruit roll up and, whoever finished first without using their hands, won.

Sophomore Cubby Doryon participated in this challenge, and said, “I loved being able to take part in a rally activity because, although I was at home, I felt like I was still part of the Notre Dame family. It was a creative way for students to be able to engage in rally games live, while being in the comfort of their own homes. Even though I lost, I still had a lot of fun.”

At the end, seniors came together for a “four more months” chant, a special tradition to signal a countdown to graduation.

This Wreck-It-Ralph themed rally was a wonderful ending to the week, and for students to show off their school spirit at home.