Lent is one of the holiest times in the Catholic Church dedicated to prayer, fasting, and almsgiving. 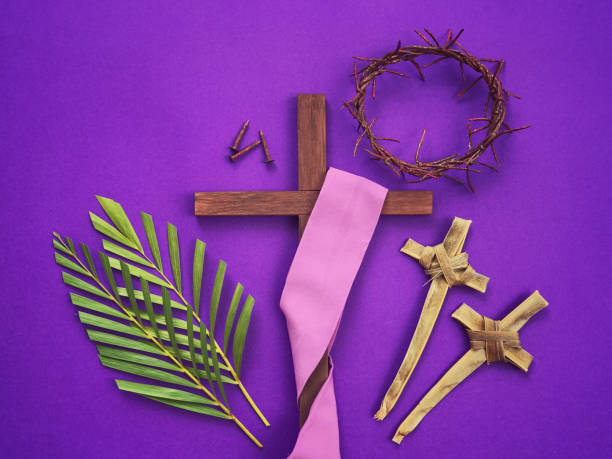 Every year, Catholics spend 40 days in fast, prayer, and almsgiving leading up to Easter Sunday. Many Catholics use this time for reflection and prayer with the ultimate goal of being closer to God.

Lent begins on Ash Wednesday which was on February 17th this year. Britannica states, “Ash Wednesday is a solemn reminder of human mortality and the need for reconciliation with God and marks the beginning of the penitential Lenten season” (britannica.com). The Roman Catholic Church obtains burned palms from the previous Palm Sunday to place a cross of ashes on each worshipper’s forehead. This is usually one of the most heavily-attended non-Sunday masses of the year. Most people abstain from eating meat as well as only have one full meal on Ash Wednesday.

You may hear someone say they are giving up chocolate or coffee or watching TV during lent. But why? The idea of giving up something for Lent is intended to represent and help us understand Jesus’ sacrifice for us as He went 40 days without eating or drinking.

During this 40-day journey, Catholics are called to give up meat on Fridays as well as holy days. Jesus gave up his body for us on Good Friday, so this small act of abstaining from meat is a way of recognizing all He has done for us.

Lent is so much more than just giving up your favorite candy or pledging to exercise each day. It is also a time to bring yourself closer to God. Christian Leader Ani Zakaryan said, “Lent is a very special time on the religious calendar. For me, fasting is not merely giving up food or a habit. Instead, it is drawing closer to God. To fast and not merely be in God’s presence more often to me is pointless. We must give up something the way Jesus did and give that time to Him.”

April 1st marks Holy Thursday. This day is celebrated to commemorate Jesus’ Last Supper with the apostles. Holy Communion was established at this time and is still used in the Christain Church today.

Good Friday takes place on April 2nd. This is the day Jesus was crucified and died for our sins. This is a day of fasting, sorrow, and penance. Jesus was hung on the cross in the afternoon and died around 3 p.m. Some make it a tradition to abstain from talking or entertainment during this time to reflect and pray. April 3rd is Holy Saturday when Jesus was laid in His tomb.

Easter takes place on April 4th in 2021. It marks the end of Lent. This day is considered the holiest day in the Christain Church because Jesus rose from the dead and saved us all from sin. Some celebrate by waking up to candy that the Easter Bunny left or having an Easter egg hunt. Before anything else, we must remember that this is a Holy Day to give thanks and spend time in prayer.

Christian leader Izzie Ramirez stated, “To me, Lent has been different over the years but what it boils down to is not a diet or a New Year’s resolution but a time to work on your relationship with yourself and with God. Once you realize that, it makes Lent so much more important and for a purpose other than simply for yourself.”

Catholics tend to focus on prayer, fasting, and almsgiving during Lent. Prayer draws our relationship closer to God. Pope Francis said, “Lent is a privileged time for prayer.” Fasting gives worshipers time to reflect on their relationship with God by not being consumed by distractions. Pope Francis stated, “Fasting makes sense if it really chips away at our security and, as a consequence, benefits someone else…” Almsgiving is a way of giving thanks to God and reflecting that we are the Body of Christ.

Lent is such a special time to focus on what is really important. Whether that be taking the time to spend with your family or attending mass on Sundays, these 40 days are dedicated to strengthening and building your relationship with God.