Half Unicorn, Half Dragon Monster?!

The Origins and Celebration of Chinese New Year 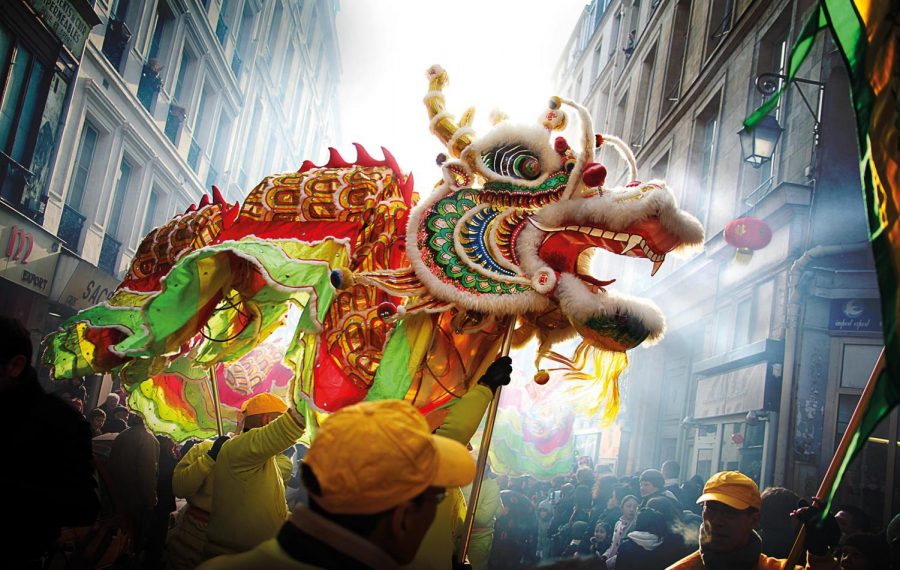 A Guo Nian Costume/Float reminding everyone of the celebration's origin.

Long ago, in the deepest parts of the sea, lived a beast who was said to look half like a dragon and half like a unicorn. On the eve of every New Year, the beast they called “Nian” would terrorize a nearby village by ravaging the grain and ingesting the livestock, as well as people. Though, his most preferred snack was children.

As any would, the townspeople feared for their lives whenever this time of year rolled around. Not knowing how to stop their inevitable, yearly doom, the villagers would run and hide in the mountains once a year.

One New Year’s Eve, however, an elderly, white-bearded stranger approached the village. An old woman who spotted the man called many warnings out to him, “Hey! Go Hide! Nian is coming! You’ll be eaten!” The man replied in an unconcerned tone, unafraid, “Don’t worry. Let me stay with you in your home tonight. It is tonight that Nian will be tamed by me.” Skeptical, but afraid, the old woman agreed.

When night fell, Nian appeared. Ready to tear up the village in order to satisfy his hunger, the monster approached the old woman’s house where the man waited.

On the door hung red paper, and the demon stopped to inspect it. Then, Nian was met and deafened by the pops and booms of firecrackers and exploding lights. While in pain and shock of the surprise attack, the man, dressed head to toe in red came up to Nian. Upon sight of the man, Nian fled in terror, retreating back to the sea.

As the townspeople came back home from the mountains the next morning, they found their village safe and untouched. Confused, they asked the man his secret. He replied, “The color of red, the dazzling light and loud noise. These are the three things that will frighten away the beast.” Following his instructions from then on, Nian never returned.

Many versions of the legend of Guo Nian, like my rendition, has been passed down orally for many years and falls at the heart of Chinese New Year. The beat of drums, the pops of fireworks, and the bright light exuding off the hung lanterns cover the streets to keep Nian away and scare off any lurking beasts. The Chinese tradition of hanging red couplets on their doors during the Spring Festival also stem from the lore.

When preparing to celebrate Lunar New Year, gratitude towards your family, especially elders, is immensely important. The core values of family and respect in Chinese culture are greatly embedded into the grand 21-day long celebration.

Ms. Chang, the ND Mandarin teacher explains, “I remember since I was very young how big of a deal Chinese New Year is. I was born in Taiwan, and I remember my parents closing their shops for the New Year. I would go and see all my relatives around this time. We would gather around for a meal and the food became a big component of the celebration. My fondest memory is of my grandfather making dumplings that represented chinese gold ingots, endless, endless dumplings.”

The food only becomes a focal point since it encourages family to come together to celebrate with one another. However, when gathering with family during a Chinese New Year celebration, respect towards elders is even more emphasized and focused upon for they came before us and built the family we are now surrounded by. The generational aspect of celebrating family is key to this. Ms. Chang puts it as, “We honor all the generations, and above all else, acknowledge family as a whole, together.”

Chinese New Year also is referred to as Lunar New Year since it marks the first new moon of the lunisolar calendars that is common in many Asian cultures. “Chinese people really put an emphasis on all things ‘round’ and a ‘complete cycle’ for the New Year really is a time of completion.”

When discussing Lunar New Year, talk of the Chinese Zodiac Animals always arises, for each year is a new year represented by a different animal of the Chinese zodiac. The Chinese zodiac originates in an ancient folk story that says that the Jade Emperor invited all the animals to a feast and whatever 12 animals arrived first would be in the Zodiac. The lore says “The Rat and Cat were both extremely clever, and decided to hop on the Ox’s back during the race. Before they arrived, the Rat pushed the Cat off into the river, and hopped off the Ox’s nose to place first in the competition. Legend says that because of this, cats chase rats for revenge to this day.”

2021 is the Year of the Ox. It is said that those born in the Year of the Ox are hard workers and persistent in whatever they do. One can determine their Chinese Zodiac animal by their year of birth, almost like astrological signs!

However, the celebration of those who are not of Chinese-descent is not limited to figuring out what Chinese zodiac they are. Instead, Chinese or Lunar New year is an opportunity to celebrate and invite other cultures to join in. Everyone loves to eat, and with food being one of the main methods of celebration, anyone of any ethnic background is called and encouraged to gather and learn more about each aspect of Lunar New Year and Chinese culture as one, welcoming family.