Halloween Costumes and the Privilege of Choice

Why YOU Should be Conscious of Cultural Appropriation in Halloween Costumes. 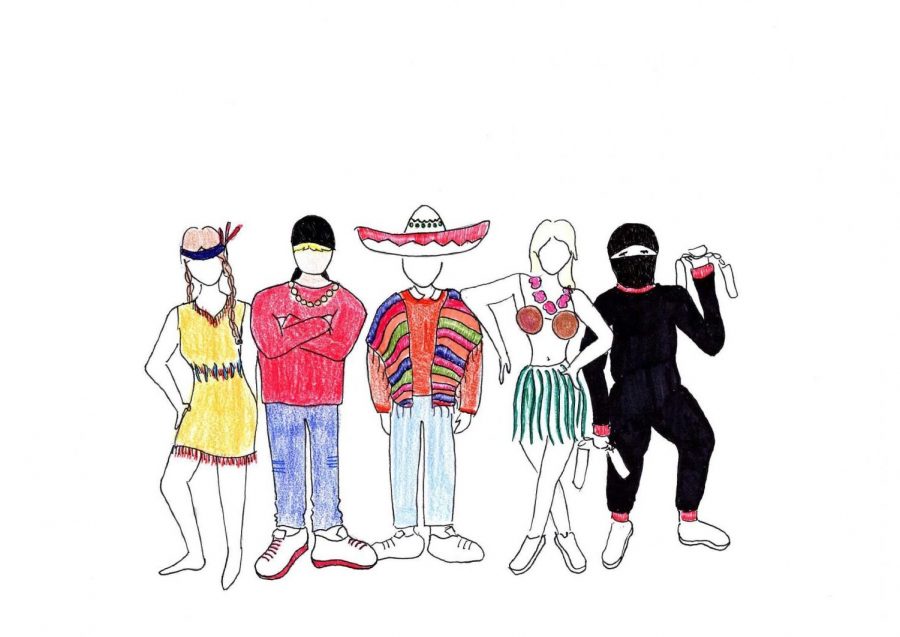 When children approach their parents with a costume idea from the Disney movie Moana, that they’ve seen a million times, singing How Far I’ll Go to their heart’s content every opportunity they get, why is their overflowing excitement halted by horror-filled expressions and a head shake from their parents?

Prior to Disney’s November 2016 release of Moana, Disney stocked store shelves with character costumes from Moana to Hai Hai in early October to build up the anticipation for the film.  What Disney did not anticipate, however, was the Internet backlash from fans and parents when it came to the costume for Maui.

Moana, though a work of fiction, is based on the very real heritage and history of Polynesian islands. Writers of the film drew inspiration from drew inspiration from elements of the real-life island nations of Fiji, Samoa, and Tonga. was based in polynesian culture, Disney’s Maui costume featured a skin tinted suit with tribal Polynesian tattoos, matching the ones the animated character one has. The tint of the “skin” was tanned as Maui has an islander skin tone, which came off as creepy and sparked conversation about cultural appropriation in children’s halloween costumes.

“This might be the creepiest thing Disney has ever done,” one tweeted. “‘Wear another culture’s skin!'”

Suggesting that race is something that can be put on and taken off conveniently should raise so many red flags with all individuals. Making it seem harmless to children through a Halloween costume takes the concern to another level.

Pop culture and the media today circulates these concepts and publicizes examples of celebrities appropriating other cultures. With the media’s heavy influence on who and what we see, what we should care about and what we should believe, what might have initially begun as adoration and appreciation for a culture quickly becomes exploitation within seconds.

“It really just comes down to the theme of intent vs. impact,” said Josie Lafontant ‘23.

Because Klum is known for putting a tremendous amount of effort into her Halloween costumes, she knew whatever she dressed up as would be covered publicly, so when she chose to come as a highly honored deity in Hinduism, who is meant to be worshipped in temples and not strutted across on a red carpet, she disrespected those who practice Hinduism, the Indian culture and the religion itself.

Although she had no intention of disrespecting those who practice Hinduism, the impact of her costume was negative and encouraged the marginalization of Hindus.

As Hindus only make up 15% of the world’s population in comparison to the 31% Christians add up to, Klum–as a European, white presenting, Christian woman–is part of the dominant culture (religiously and racially), “playing dress up” with a marginalized group’s highest deity.

When one has the ability to “opt out” of someone else’s race or culture when it is no longer convenient for them (as would be the case with Halloween costumes), it is considered cultural appropriation, and it is offensive. It devalues people that are a part of that culture and turns them into a commodity, often reinforcing harmful stereotypes.

“When someone dresses up in another culture as a costume, for example blackface, they have the choice to not only put on that costume, but take it off as well. Because they have the option to remove the skin color, they do not have to face the consequences and struggles that come with having black skin. Those who are actually Black do not have that choice. It is disrespectful towards their struggles and it is an indication of privilege,” said Ethnic Studies and US History Teacher, Mrs. McKenzie.

When culture can be purchased at a Spirit Halloween store, allowing us pick and choose what bits and pieces to throw into a shopping cart from the multitude of aisle displays of different cultures, we need to recognize that it is no longer cultural “appreciation.”

Beware of those costumes with vague and generalized labels displayed in stores during the month of October. “Native American Maiden” or “Skull Mariachi Costume,” might as well say “Culturally Appropriated Stereotypes.”  These costumes devalue others and denies people the  opportunity to educate those outside a culture–they ignorantly turns aspects of a culture into a commodity or a fetishized version of the original, reinforcing harmful stereotypes.

No one’s culture should be stuffed into a plastic baggy or published on Pinterest as a poorly researched craft project advertised with degrading titles.

So when you are considering your Halloween costume this year remember the reasons why we should not appropriate another culture (reachout.com).

2. It doesn’t give people credit for their own culture. Cultural appropriation also has a nasty habit of giving the dominant group credit for aspects of a culture that they have taken, reinforcing the power imbalance between the two groups.

3.  It creates stereotypes. Cultural appropriation often adds to stereotypes faced by non-dominant cultures. The Native American chief, the Japanese geisha or the Arab sheikh can be examples of stereotypes that pop up during Halloween. When people from dominant cultures ‘dress up’ like this, it reduces something of cultural significance to a costume just so that the dominant group can have ‘a bit of fun’. It also keeps these kinds of stereotypes going. And when cultures have been oppressed, stereotypes often add to their negative experiences.

The best rule of thumb to prevent cultural appropriation masked as a Halloween costume is through credible and thorough research, allowing it to become a learning opportunity about a side of the world you haven’t encountered deeply yet. And if there’s still a grey area of uncertainty a few articles, videos and books later, it’s best to refrain and choose something else.

Allow the discussion of cultural appropriation in the Halloween costume industry to become a gateway into a deeper understanding of those around you and their personal experiences as the spooky day creeps up on us.