“Yes, And” a Whole Lot More

Thirteen students from all four grade levels put the “improv” in “improvement.” 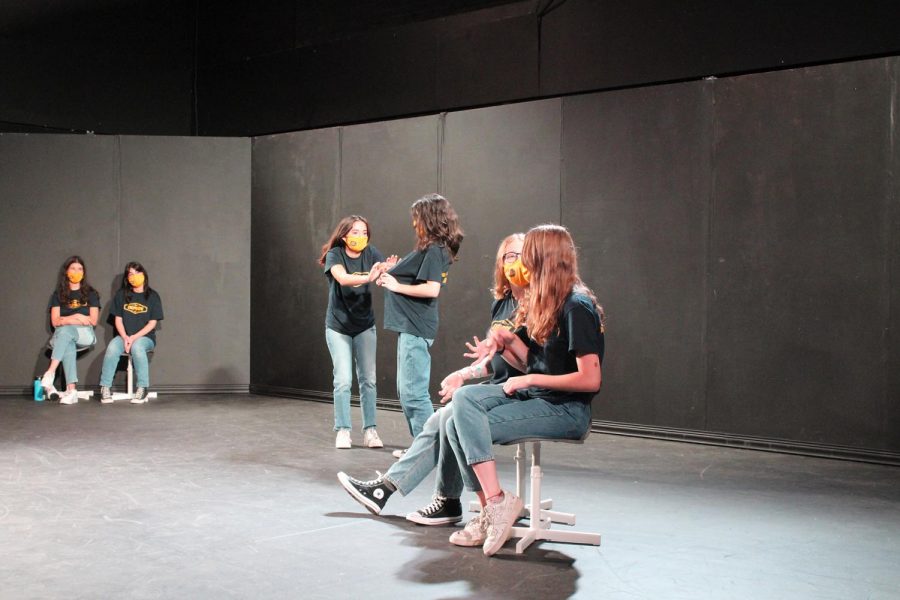 Laughter fills the Black Box Theater as the Improv cast takes the stage for their last show.

In most shows performed on campus, the actors know exactly what scene, what line, and what song comes next. Hours are spent memorizing a set script to be acted out the same way it was practiced in rehearsal. Directions are precise and blocking is meticulously planned.

But what happens when the actors don’t know what comes next?

The first in-person performance at Notre Dame since 2019, the 2021 Improv Show sent roars of laughter emanating from the Blackbox Theater.

The crowd and cast alike delighted in the surprises that arose when scenes were made up on the spot and witty puns and callback jokes were interwoven through ten energetic, interactive games.

It is hard to believe that just shy of two months ago, our group of thirteen was far from a cohesive team.

On the first day of rehearsal, we formed separate islands of two or three as we listened to Mr. Wollman’s instructions. The friends who already knew each other stuck together like magnets.

Our first scenes were short and strained, awkward jumbles of something that almost resembled conversation—but even calling them that would be a stretch.

I remember driving home that day, exhausted after three hours of work. Even with six weeks of practice ahead of me, I was worried about the outcome of the show—and I would later learn that many of my castmates felt the same apprehension.

Slowly but surely, however, things started to change. I watched as idiosyncratic characters transmogrified the castmates I had discounted as shy. I listened in awe as quips were passed back and forth without hesitation, replacing the timid ‘ums’ and ‘ahs’ of the weeks prior. I giggled impulsively as my fellow actors committed themselves so fully to a scene, embarrassment no longer threatening their ingenuity.

I was eating a granola bar on our five minute break, my abs sore from laughing, when at last it hit me—we were funny!

It was all crazy to me. Just a few weeks ago, we were strangers. Now, we had become our own little family.

Maggie Schmidt, a sophomore with an absurdly realistic suburban dad impression, had a similar experience.

While she had participated in the online improv show last year, she was excited to be involved in something in-person. When I asked about her favorite part of the whole ordeal, she smiled and said, “I loved staying late with everyone at rehearsals. Every single person on this cast means so much to me, and getting to do my first actual high school show with all of them was awesome. It really brought theater back for me.”

No shortage of credit goes to brand new faculty member Mr. Wollman, who was truly the heart and soul of our production. Equipped with an extensive background in both performing and teaching improv, he approached our quirky congregation with a patience beyond what words can describe. He guided us through unfamiliar games, coached us through the labyrinth that is audience suggestions, and showed us how to think on our feet—even if that meant our feet were the hooves of a half-human half-pig creature who somehow ended up in her high school’s salami club. (You kinda had to be there.)

When I spoke to him about his thoughts on the show, there was a clear sense of pride radiating from his words. Because while our dedication was impressive on its own, the recognition and praise we received from the community only intensified the feeling.

Mr. Wollman said, “Even just this week—though it feels like forever since the show closed—I was making copies and a teacher came up and told me how her face hurt from laughing so much at the show. There’s just been this steady stream of people struck by the amazing, confident job you all did. It’s been a joy for me to see all of you grow in your confidence and take ownership of everything; and it’s been amazing to see all that work you’ve done be acknowledged in such a positive way.”

“I had this friend, his name was Joe, (boom chick, boom boom ba-chick) and I am really grateful I was a part of this improv show.” (You definitely had to be there.)