A Look into Alexandria Ocasio-Cortez’s Journey into Congress 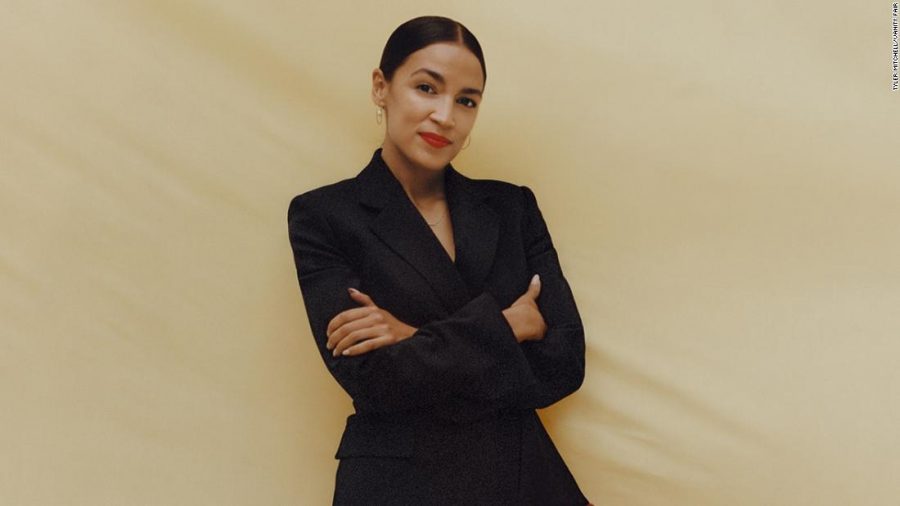 In July 2020, Congresswomen Alexandria Ocasio-Cortez caused massive cultural upheaval across the country in the media for what The Gaurdian called “the most important feminist speech in a generation” directed towards a disparaging comment Congressmen Ted Yoho made about her.  “I am here because I have to show my parents that I am their daughter, and that they did not raise me to accept abuse from men. This is not new, and that is the problem,” she said. “It is cultural. It is a culture of lack of impunity, of accepting violence and violent language against women and an entire structure of power that supports that.”

As a young girl growing up in Yorktown, New York, Ocasio-Cortez noticed blaring inequality in her town, a place where gangs were prevalent and kids went through metal detectors at school and a strong dignity in the working class. Her father’s passing “put a fire under her” to fight for those with fewer opportunities and provide for her own family. She took jobs bartending, working at maternity clinics, and studied hard in school, earning a degree in economics and international relations from Boston University in 2011.

Ocasio-Cortez got her first taste of professional politics while working for the late Senator Ted Kennedy on immigration casework and foreign affairs. The role in his office gave her first-hand experience with the heartbreak caused by families being separated by ICE. This inspired her to organize Latinx youth in the Bronx and across the country until she eventually became the educational director at the National Hispanic Institute helping high schoolers “expand their skillsets in community leadership and social enterprise.” While running for congresswoman in 2018, she said in her campaign video, “Women like me aren’t supposed to run for office. I wasn’t born to a wealthy or powerful family.” She went door-to-door in communities prominently comprised of young people of color in the working class. Ocasio-Cortez shattered significant barriers by becoming the first person of color and woman to challenge Democratic Representative Joe Crowley in 14 years. At 29 years old, she shocked everyone by making history becoming the youngest person ever elected to Congress.

Unfortunately, since being elected, she has experienced a wave of harsh criticism from her colleagues, as well as the conventional phenomena of women being held to a higher standard than men. She’s faced subtle jabs at her low socioeconomic background and has been perceived as less qualified than her peers due to her age. She’s come under fire for everything from spending money on her hair, “a non-socialist” thing to do, to wearing a nice suit to work. In an interview for Vanity Fair she said, “There have been many times, especially in the first six months, where I felt like I couldn’t do this, like I didn’t know if I was going to be able to run for reelection,” Ocasio-Cortez says. “There was a time where the volume of threats had gotten so high that I didn’t even know if I was going to live to my next term.” However, despite criticism, she has never ceased to be outspoken about her beliefs or hold back on critiquing someone on the Internet when they have something to say about her or her views.

Due to her background and experience with economic inequality, AOC has completely committed herself to help working-class people over corporate interests and advocating for social, racial, economic, and environmental justice.

AOC has had a large hand in the introduction of the Green New Deal, a plan put forward by a group of progressive Democrats to get the world to zero emissions by 2050. According to the New York Times, “it calls on the federal government to wean the United States from fossil fuels and curb planet-warming greenhouse gas emissions across the economy [and] also aims to guarantee new high-paying jobs in clean energy industries.” In a video call with climate activist Greta Thunberg, Ocasio-Cortex said, “We are no longer at the point of preventing climate disaster from happening entirely – we are now at the point of minimizing the damage.” In an interview with Seth Meyers, AOC spoke on the Green New Deal saying, “it is about being more expansive. It is to make sure we are investing in working-class Americans so an affordable apartment is, not a dream, but a norm and health care is a right, not a privilege.”

She has been particularly influential among the Gen-Z demographic. With an Instagram following of almost 8 million and over 10 million Twitter followers, she has connected with the youth in a special way. She even hosted a livestream of her playing the popular video game “Among Us” on Twitch in an effort to encourage young people, who she labeled as “realistic and pragmatic,” to vote. In an interview on CNN’s “State of the Union,” she said, “Young people right now have a very disciplined activist mindset. They want to vote for a president that is at least going to be receptive to their advocacy, activism and protest.” The livestream garnered almost 5 million views, and was one of the most-watched streams in the server’s history. An analysis from the Center for Information and Research on Civic Learning and Engagement (CIRCLE) at Tuft’s University showed that youth voter turnout (ages 18 to 29) surged by about 8 percent this year compared to 2016, from 45% to 53%. They are also believed to have had a major hand in Biden’s win for presidential elect 86% of black youth, 83% of Asian youth, and 74% of Latino youth voted for Biden.

Anthony Davinci ‘22 says “I absolutely adore AOC, Not only does she do her job very well, but she also tells it how it is and that’s how I live life, and I love to see a strong woman of color do the same!”

Her progressive ideas largely mirror many of the rising generation’s beliefs, and many have expressed their hopes to have her campaign for office. Regarding whether Ocasio-Cortez will run for presidential office one day, former Housing and Urban Development secretary and 2020 candidate Julián Castro said, “She absolutely has the talent, the dynamism, and the leadership ability.” “I don’t want to aspire to a quote-unquote higher position just for the sake of that title or just for the sake of having a different or higher position,” AOC said. “I truly make an assessment to see if I can be more effective. I don’t want to be a savior, I want to be a mirror.”  Representative Ayanna Pressley said, “She certainly did not set out to be an icon or even a history maker. I think it was her destiny, but there is no calculation.” It is clear her agenda is utmost altruistic, and she has many big plans to further our country in the right direction.